What a rape kit is (and isn’t)

What a rape kit is (and isn’t) 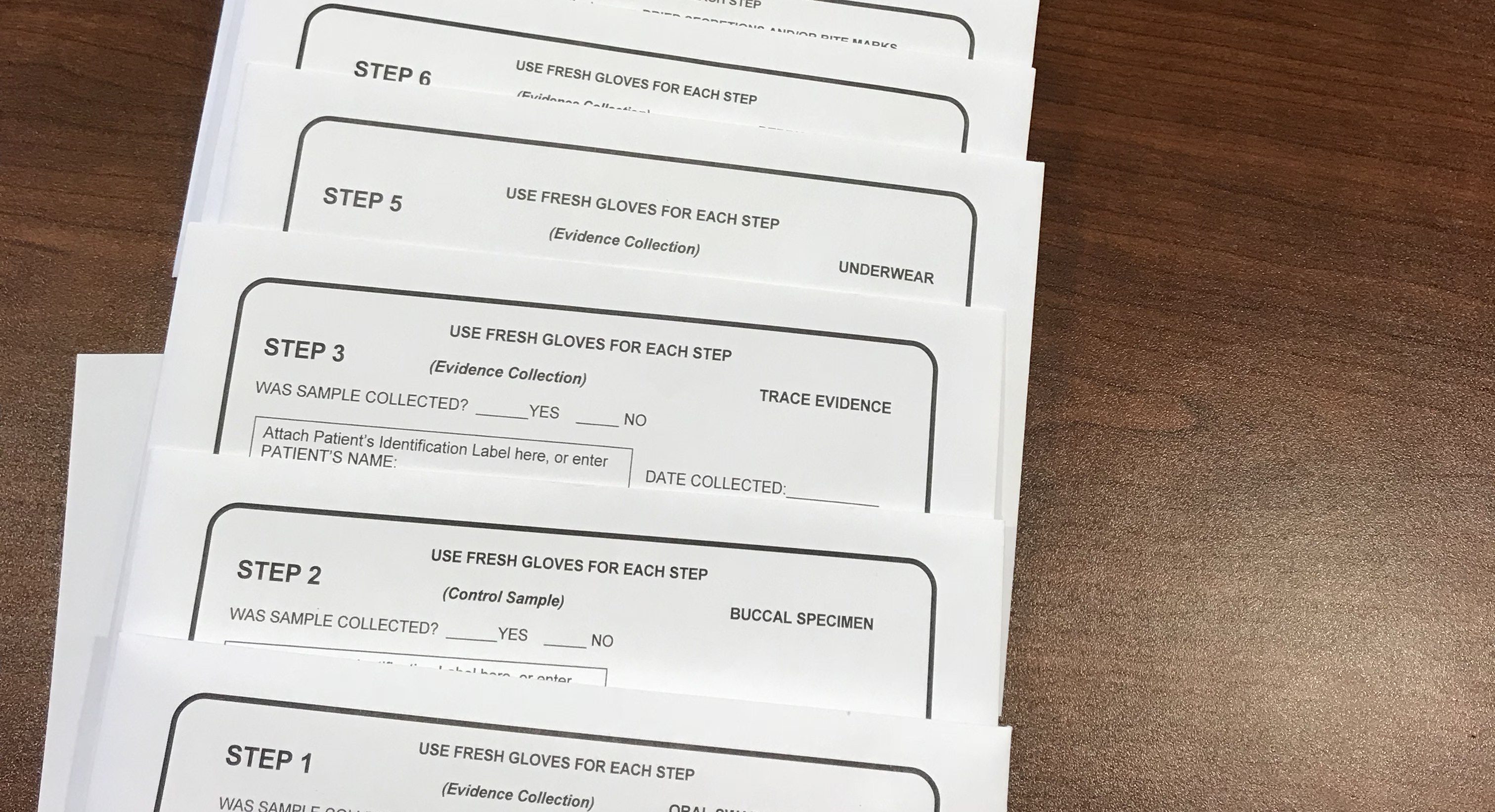 Graphic discussion of sexual assault evidence-collection process ahead. The steps and images used in this article are taken from the New York State sexual offense evidence collection kit.

Nicknames and acronyms are plentiful for this little box.  Most commonly, they are known as rape kits, or forensic rape exams (FRE).  Using one of these kits, certain evidence such as DNA and debris can be collected from a crime scene — and when it comes to assault, that crime scene is the survivor’s body.  Even if you never have to use one, it can be helpful to know what exactly a rape kit is, and what it isn’t.

There are a total of 15 steps in a rape kit, all of them optional, some gender specific, and many of them traumatic. Altogether, the process can take up to four hours or more. Every rape kit varies from state to state but all generally contain:

Can any doctor or nurse do a rape exam?

The only people who can conduct a rape kit are Sexual Assault Nurse Examiners (SANEs), registered nurses who (hopefully) received specialized education and fulfilled clinical requirements to perform the kit, Sexual Assault Forensic Examiners (SAFEs) and Sexual Assault Examiners (SAEs), other types of healthcare professionals who have been instructed and trained to complete the kit. For the duration of the exam, the medical provider must remain with the kit. While New York State requires every hospital and emergency unit to have kits and trained medical professionals, requirements vary from state-to-state. Check with your local hospital to see if this is a service they are available to offer 24/7.

How do you prepare for a forensic exam?

Evidence must be collected within the first 96 hours in order to be the most effective, but sometimes medical providers will conduct a kit beyond this time frame just in case. Everything is collected into cardboard boxes and paper bags because plastic and moisture can destroy DNA evidence.

Patients have the right to refuse all or part of a rape kit, and obtaining a rape kit does not mean a patient must press charges. If at all possible, it is best for a patient to avoid showering, using the bathroom, changing clothes, or combing their hair prior to having an exam.

The patient is swabbed around the mouth, gums, in between the cheeks and under the tongue.

This sample is taken with what looks like a tiny brush to swab the patient’s cheeks in order to differentiate between the patient’s DNA and the perpetrator’s DNA.

Colloquially known as a “strip ‘n’ shake,” a patient undresses over a sheet of paper in case there is any evidence to be collected, such as pieces of grass or a stray hair. The patient’s body is a crime scene and no piece of evidence, no matter how minor, should be overlooked.

This refers to any debris that may be found on the patient, such as dirt between their toes or something stuck in their hair, which can be used as evidence.

The patient stands, partially undressed, while they are examined with a black light to search for any bodily fluids that can be collected for evidence.

This is to collect any DNA the patient may have collected from the perpetrator during a struggle. Each hand and nail is scraped over a piece of paper.

These steps have changed, but it used to involve pulling hair from the head and the genital area. It is a painful process to inflict upon someone who has already experienced a great deal of trauma and suffering. Now this step is only done if the examiner deems it absolutely necessary.

During combing, it may be possible to locate hair that belongs to the perpetrator.

The outside of the vulva is swabbed. For male patients, the penis is swabbed and the area around the testicles. Previously, the inside of the penis was swabbed but testing has advanced where STI testing can be done through urine analysis instead, removing yet another painful step of the FRE.

The inside of the vagina is swabbed and then the cervix, which is the entrance to the uterus. Vaginal swabs can be done without a speculum but one must be used in order to access the cervix.

The kit is never to be left alone. The medical examiner should always have custody of the kit unless handing it off to a law enforcement official who will bring it to a crime lab.

If you or someone you know is attacked, you don’t have to report the crime to the police to have an exam or kit completed. However, the process gives you the chance to safely store evidence should you decide to report at a later time. Many states are now required to preserve rape kits for up to twenty years.

It is also important to note that hospitals will offer emergency contraceptives if you come in for a rape exam. You are not obligated to accept.

You are also allowed to have an advocate with you for the entire process. An advocate can help ensure that everything is done according to the law and looks out for your best interests. Advocates are usually available from the local rape crisis or victim assistance center.

To find a location near you that performs sexual assault forensic exams, call the National Sexual Assault Hotline at 800.656.HOPE (4673).